A storytelling photographer widened his focus and raised more than $300,000 in a matter of days for Hurricane Sandy relief.

When Hurricane Sandy hit New York and New Jersey in 2012, the storm damaged hundreds of thousands of homes, rendering many uninhabitable. Brandon Stanton, a photographer who had recently launched a photography-driven, storytelling website called Humans of New York (HONY), decided to raise money for Hurricane Sandy relief by sharing stories of people who came together in the aftermath of the storm.

“We hope to show all sides of the story,” he wrote on his Indiegogo crowdfunding website, “featuring not only the victims of the storm but also the first responders and volunteers who are helping them recover. Hurricane Sandy revealed the power of nature, as well as the power of humanity. We aim to document both.”

Stanton’s stories put a human face on the tragic aftermath of the storm—and the sometimes heroic, always heartwarming, outpouring of support for people who lost their homes. By putting first responders and volunteers in the picture, he laid the foundation of a highly motivating storytelling campaign.

That’s because people are more motivated to support a cause, not only when they relate to the need, but also when they understand the solution. Telling stories about people who are part of the solution to a problem gives others hope that change is possible—and it can inspire them to take action, too.

Stanton set a goal of raising $100,000. After only 12 hours, his one-man campaign raised $86,000. By the time he wrapped it up 10 days later, he had raised $318,530. All of the proceeds went to the Stephen Siller Tunnel to Towers Foundation to help people affected by the hurricane.

Impressed by Stanton’s impact, the United Nations sent him on a world tour to raise awareness about Millennium Development Goals. “In addition to telling stories of individuals” on Facebook and Tumblr, HONY and the UN hope to “inspire a global perspective, while bringing awareness to the challenges that we all need to tackle together.”

Don’t overlook stories about people who join forces to solve a problem, whether they are professionals doing a job, or donors and volunteers who provide much-needed financial and human resources. In developing a storytelling strategy for your cause, be sure to think about the people who are part of the solution. Shining a light on the “power of humanity” can dial up the motivating power of your campaign.

Video Blogging Brings Stories to Life Refugees International uses powerful videos on its blog to show the realities facing refugees around the world.

The Black Box If we can’t see what’s happening in our mind’s eye, we won’t feel anything. And it’s the feelings we remember first when we remember a story.

Your Mission Statement is Not Your Story Your stories exemplify your mission, but are not bound by it. 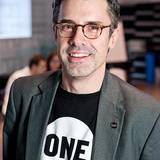 A Guide to Tumblr