Storytelling With Data: A Children's Tale

Taking a data-based visualization approach in your storytelling.

Contributed to Storytelling for Good by Limarie Cabrera and Anna Wright of Westchester Children’s Association.

A conversation with Limarie Cabrera and Anna Wright from the Westchester Children’s Association about how they take a data-based approach to identifying children’s needs.

The Westchester Children’s Association’s (WCA) Children by the Number’s project has come a long way since it first published its data in 2008! What was the impetus behind this project? Why was it established?

Limarie Cabrera (LC): WCA has always used data to understand children’s needs and track their well-being. We realized, however, Westchester County data as a whole wasn’t telling the full story of how children were doing in each of our 43 municipalities. Data disaggregated by community, by age, or by race and ethnicity was hard to find. Our goal was to deliver current, accurate and disaggregated data to our audience: social service organizations, school district administrators, local governments and other child advocates. We produced a 300+ page book in 2008, and a searchable online database with 300+ indicators in 2009.

Soon after we launched the database, we realized that our efforts confused our stakeholders instead of informing them. We found that when people are faced with many tables and charts, aka “number vomit,” they frequently shut down, so we started transforming our data into infographics, which were at the time an emerging communications tool. Luckily, the software to create them became affordable: When ESRI started releasing licenses for ArcGIS, a powerful mapping tool, through TechSoup, I did the happy dance in my office.

The blog was established as our communication platform to explain why we thought the data was important, and to share it. We didn’t abandon our offline efforts, but we significantly reduced its cost. We reduced our 300+ page book down to a six-page accordion flyer that was all infographics. The feedback has been great, and we’re noticing that people are actually using it. We get requests all the time from organizations to send copies to their boards, and schools are posting the flyers on their walls.

What are some of the most interesting or unexpected findings you’ve observed from examining the data?

Anna Wright (AW): The differences in communities within Westchester County. For example, College Readiness Rates range from 7% to 89% within the county. I feel that residents don’t really know just how vast those differences are within their community.

LC: Sometimes familiar indicators, such as poverty rate, don’t do a great job of addressing some of the inequalities that exist across Westchester because of its high cost of living. For example, here it takes an income of about $57,960 (National Low Income Housing Coalition, 2014) to afford the rent on a two bedroom apartment, and the federal poverty level for a family of four is at about $23,850 (2014 HHS Poverty Guidelines). Other indicators, such as median family income, can better demonstrate areas of need. That said, while the countywide poverty rate is about 10%, we have neighborhoods where the poverty rate approaches 45%.

AW: One of the greatest advantages of the increasing accessibility of data visualization tools is that smaller organizations can start conversations about local data. People are more likely to engage with the data at a local level. #

How does WCA use technology to keep the project going?

AW: Most of the technology tools that we use are free! As you get further into data visualization, you may decide that purchasing a program with more advanced features is worth it, but we’ve been pretty happy with the tools we use (listed below).

LC: I’ve also used R, which is a free statistical software, along with R Studio, which makes it easier to navigate the R environment. Although it’s free, the learning curve is quite steep. It took a couple MOOCs (Massive Open Online Courses) to get myself acquainted with R. And although graphic design isn’t technology, utilizing the aesthetic decisions of our graphic designer Tara Framer for the initial infographics streamlined the generation of our own later visualizations while strengthening our brand.

Can you describe the internal process behind how staff collects the data within your organization?

AW: We rely on community partners to help identify the most essential data points they need for writing grants and planning programs….

LC: However, people are usually asking us what matters instead of the other way around.

In the beginning, we wanted to remain very neutral, and we didn’t want to prioritize one data point over another. We soon realized that people don’t have the time, resources, or knowledge to make that judgment call. Since we do work with this stuff daily, we’re more knowledgeable about which data can effectively tell a story, and that’s especially important for infographics Just as important, we strive to efficiently tell that story with less data as opposed to more.

What would you say is the biggest impact the project has made thus far?

LC: We just issued a City Snapshot series, which feature some of the Westchester municipalities, and people have been eating them up. The traffic generated in one blog post equals or even exceeds the six month traffic on our old data site. Our traffic reports for the entire website show a 300% increase, and it’s exciting to see the number of Facebook shares/Retweets generated – we were NEVER able to do that on our old data site.

Even as we’re jumping up and down over website stats, we must remember – how can we leverage this increased traffic to achieve our goal, namely, better outcomes for children? In the end, the increased web traffic and social shares are proxies we use to we assess our ability to raise awareness about our children.

AW: Data visualization helps us keep our audience engaged. It keeps us and the children of Westchester County on their radar. It also builds our reputation as a resource. People know that they can turn to us for data about a particular children’s issue, and that means that we can bolster the efforts of our nonprofit and government partners as they continue to make a difference for children.

From a fundraising perspective, the data project adds another tool to our development staff’s toolbox as they communicate our mission to our donors. Many supporters are excited about our data work; this project has increased our credibility. Our efforts demonstrate that we have a reliable, data-based approach to identifying children’s needs. Keep in mind that we’ve been able to do all of this with just 1.5 staff people - so you don’t need a large staff to have a real impact!

Limarie Cabrera has been the Director of Data Analysis at WCA since October 2007. She has lead management, training, and marketing initiatives in the private, non-profit, and government sectors. Previously, she worked at the public health organization, Public Health Solutions, in New York. Limarie received her Bachelor’s of English from Bryn Mawr College, and her MPA from Columbia University’s School of International and Public Affairs.

Anna Wright is the Research & Administrative Assistant at WCA. She joined the WCA team in 2014 to provide support to the Directors of Data and Development. Previously, she worked as a Programs Assistant in Syracuse, NY. Anna holds a bachelor’s degree in Intercultural Studies from Houghton College and lives in Mount Vernon, NY with her husband.

Humans of New York Raises $300,000 A storytelling photographer widened his focus and raised more than $300,000 in a matter of days for Hurricane Sandy relief.

Writing for the Web: Developing Voice, Tone and Editorial Structure Best practices to ensure your web copy is clear and compelling. 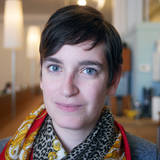 Cutting Through The Jargon Make your stories simple and appealing.