Use different mediums to broaden your audience and tell great stories.

Once upon a time…

It’s the most standard story opener that exits. But, I’m willing to bet it still hooked you, right? You were eager to hear more and see how the story unfolded and unraveled. And, you likely weren’t subtly slinking away thinking that I was about to bore you with endless blabbering about facts and statistics.

There’s simply no overemphasizing the impact of a powerful narrative. And, even if your story doesn’t involve those classic dragons, castles, and white knights, it’s still possible to identify a sweet spot that not only shares your nonprofit’s mission and goals, but also motivates and inspires your supporters.

Still not convinced? Take a minute to think about advertisements for common, mundane household items. Dawn dish detergent doesn’t always talk about battling caked on grime and grease on those pots and pans. Instead, they share stories of rescuing adorably fuzzy ducklings from oil spills. P&G doesn’t just bombard you with endless images of paper towels and laundry detergent, but occasionally opts to offer a heartwarming montage of a mother’s love for her child.

When we created the CauseVox crowdfunding platform, we did so with this idea in mind: a powerful story is crucial to a nonprofit’s success. Supporters need something that they can connect with and cling to in order to feel motivated to donate. And, we’re proud to see that our users have used their stories as cornerstones of their fundraising efforts—on their websites, fundraising pages, social media accounts, and even in their emails.

There’s no doubt we’ve seen tons of remarkable narratives shared by nonprofits on our platform, and it’s almost overwhelmingly difficult to choose just one to feature. But, Allies Against Slavery, an Austin, TX organization that aims to eliminate human trafficking and modern slavery and empower the survivors, is definitely worthy of note.

Their mission is incredibly admirable—but it’s also one that needs a strategic, well-crafted narrative to carry it. As a cause that most people still see as nonexistent here in the states, Allies Against Slavery not only needed to illustrate the problem—but also its relevance.

The key to telling a great story for your nonprofit campaign is using different mediums to do so, which in turn broadens your audience, and Allies Against Slavery did just that.

Allies Against Slavery employed numerous tactics, including a heart-wrenching and inspirational blog post about what their #SurvivorStrong15 campaign is and why exactly it’s important. They also posted an informative and engaging video directly on their fundraising website to draw in and educate potential supporters immediately.

In addition, they pulled in their social media following, using quotes from human trafficking survivors to illustrate the need for their campaign and the power of supporters’ dollars. 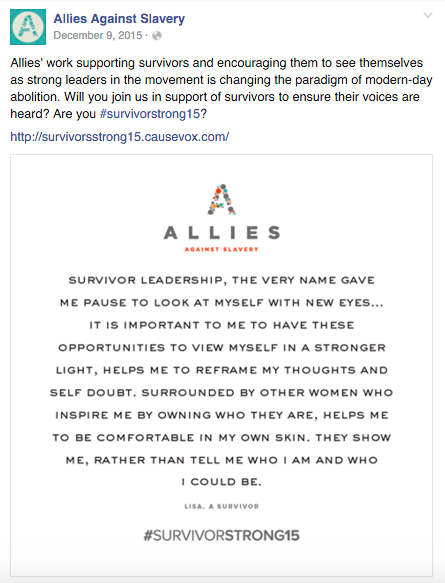 However, Allies Against Slavery didn’t sacrifice all reason and practicality for pure emotion and spectacle with their storytelling. They engaged their supporters not only through real-life accounts and tear-jerking verbiage, but also through use of facts, figures, and information.

They clearly illustrated the campaign’s potential impact, by sharing statistics like, “A $75 donation provides an afternoon of professional development training to a local survivor looking to kick-start a new career path.” 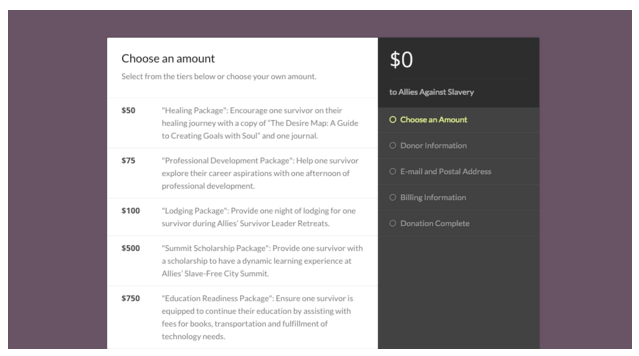 Using donation tiers to specify the impact of every donation, Allies Against Slavery drove donations forward by making their donors part of the story as well, making each donor feel that their donation, no matter how small, counted towards accomplishing their mission.

And, they were completely transparent with their successes and milestones, capping off their year end fundraising campaign by sharing an interactive timeline with their fundraising community.

In addition to using multiple fundraising tactics to promote their main campaign site, they utilized the power of peer-to-peer fundraising to maximize the potential impact of their campaign. 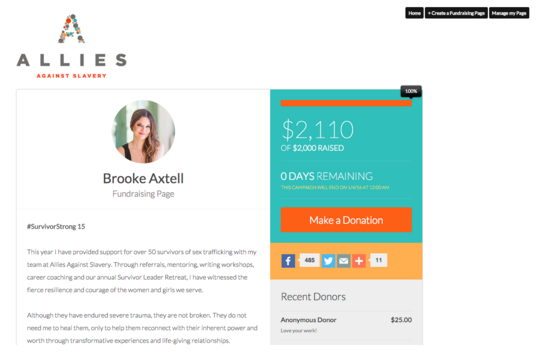 Allies Against Slavery empowered their supporters to make a difference by entrusting their story to their supporters, who were able to set their own personal fundraising goals and share their own stories about why they were so passionate about the cause.

Sending out their stories to friends and family, each personal fundraising page was promoted on social media as well, expanding the reach of their campaign to new audiences. 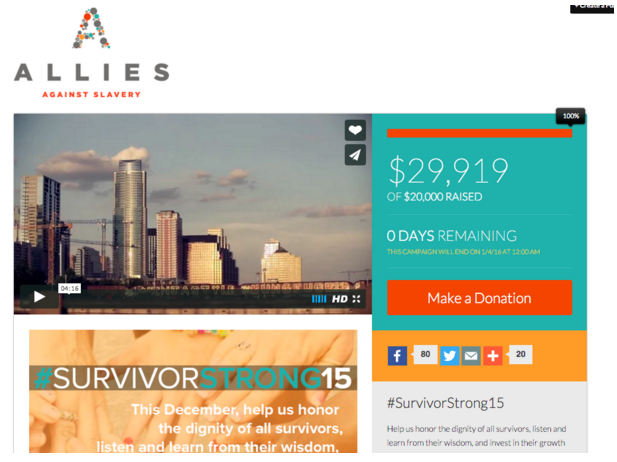 By striking this perfect balance of logic and emotion, Allies Against Slavery raised $9,919 over their $20,000 fundraising goal in the month of December—a remarkable feat for any nonprofit organization. And, it’s a success that can likely be attributed to their quality, strategic storytelling.

At CauseVox, we’ve seen more and more the power and impact a strong narrative can hold. It’s the key to hooking your supporters, connecting them to your cause, and motivating them to donate. So, while your success may not begin with the standard, “Once upon a time…”, it definitely does all start with a story.

A Guide to Measuring Impact With Third Party Tools

A Guide to LinkedIn

What are Archetypes and How Do I Use Them in Storytelling? Part I How to drive people to work towards a goal and support your cause through storytelling.

Evaluating Storytelling: Where to Start? Three ideas starting to evaluate your storytelling efforts.