Why the Small Stories Matter in Nonprofit Marketing

Share moments of triumph and hope to fuel action from your supporters.

For Mother Teresa, change happened in ordinary ways—one person, one meal, one day at a time. The more she offered bits and pieces of her heart to the poor, the more others realized that they could give, too. Since the 1950s, more than three thousand sisters joined her quest to serve the poor. Almost two decades after her death, her mantra of “doing small things with great love” lives on.

All nonprofits start from these moments of kindness and compassion, known in the screenwriting world as “inciting incidents.” These instances reveal triumph and hope and give organizations the fuel they need to work toward seemingly insurmountable goals, from finding a cure to cancer to ending homelessness.

We cannot all be Mother Teresa, but we can take her advice as nonprofit marketers, faced with gathering support for our organizations. Here’s now three nonprofit organizations use storytelling to motivate their supporters.

Moving Beyond Guilt and Finding a Unifying Force

No matter how many times my mother told me to cut down on my shower time, I always snuck a few more minutes in. “Think of all of the people in Africa, soaking themselves in mud!” she’d say. “This is not a plentiful resource!”

The truth is, I didn’t really think about the people in Africa as my mother requested. All I could hear was her yelling through the bathroom door, telling me that I had it better than I realized.

Although Scott Harrison, the founder of charity: water, has plenty to yell about to a nation that keeps the faucet running while brushing teeth, shaving, and washing dishes, he created a brand that never raises its voice. Instead, it tells the story of clean water—what happens when we have it, and what happens when we don’t:

What makes this video and the rest of charity: water’s story so powerful is that it places its supporters and its recipients side by side and shows how the movement transforms each person. The organization’s work led Tenica, a 54-year-old mother in Mozambique, to start a bread-baking business, and gave Samantha Paul, who lost her nine-year-old daughter Rachel in a car accident, the opportunity to lead a campaign in Rachel’s memory that now provides 37,770 people access to clean water.

Each story charity: water publishes touches upon the grim realities that communities face and ends with a tone of hope and gratitude. At the end of the video posted above, the narrator proclaims: The water crisis is solvable. The music shifts from dramatic violins to a fast-tempoed xylophone. The colors turn from dour browns to optimistic blues and greens. The animations portray the ripple of changes that happen when communities gain access to clean water, from new schools to thriving businesses and family members gathered around a table. This is a world that we want to be a part of—where people lead healthy, vibrant lives. The only way to make it real is to help charity: water continue its work in every corner of the world.

Create Something to Hold Onto

Hundreds of millions of people across the world suffer from chronic hunger. But many of us hand over our credit cards every day at the lunch salad bar without a second thought.

Lauren Bush Lauren, fashion model and designer, sought to encourage more second thoughts. She wanted to reduce the distance between her world in the fashion industry and the world she visited in Chad, where children grow up without the food and nutrients they need. She started FEED Projects, which sells bags and other accessories to directly benefit children suffering from hunger and provide meals and micronutrient packets in schools in Cambodia, Chad, and Guatemala. “Hunger is a persistent problem and is so large that many people don’t know how to begin to engage it,” she said in an interview with Leaders Online. With FEED, she gives people with the resources a tangible way to give back. 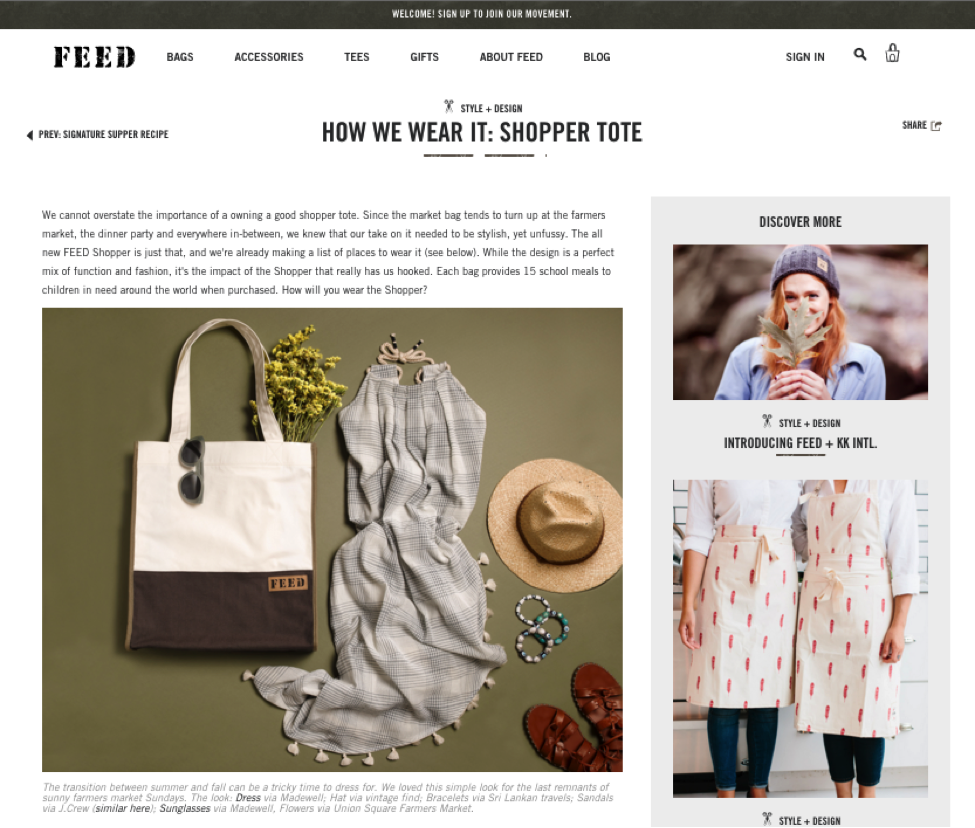 FEED’s website and social channels rival Anthropologie’s, with images of table settings, potted flowers on an urban doorsteps, and appetizer spreads alongside the bright and smiling faces of FEED’s children. Providing something that people can hold onto not only gives them a reason to come back and buy more, it provides a reminder while we stand in line at the grocery store or sit down to dinner with our families that the need to feed the world continues.

With its 1,800 domestic and international chapters, the United Way Worldwide impacts more than 50,000,000 lives. But it’s hard to wrap your mind around numbers, especially when the number is eight times the size of the population of New York City. For such a big organization, showing its impact in a concrete, relatable way can be tricky.

To do this, United Way had to go outside of its headquarter walls and into the communities where the real work unfolds. The team launched the Day of Action, an annual day-long event where chapters round up volunteers to serve at food pantries, schools, and neighborhood centers. Through short videos, the organization brought the Day of Action in Milwaukee, Wisconsin and Durham, North Carolina to life.

These short moving stories, shown through video, allow the audience to get to know the volunteers and see the groups in action, organizing cans of food in trucks for low-income areas and building picnic benches in neighborhood parks. “It’s our community,” said Pat McQuillan, a Milwaukee volunteer, “If we aren’t doing anything to help it, it’s not going to grow and it’s not going to thrive.”

Each clip reinforces United Way’s mission to #LiveUnited, and reminds donors of the diverse and widespread ways that it supports people around the world.

From Rough Material, Imagining the Next World

At its best, nonprofit marketing is full of paradoxes. It reveals the sheer gravity of a situation but not the impossibility of it, calls people that live on different continents to care for one another, and asks its audience to go to the dark corners of their neighborhoods instead of curling up to the pleasant glow of their Apple TVs.

By taking this challenge head on, nonprofit marketers must do what Oscar Wilde referred to as painting a picture of a world that “will be more marvelous, more enduring, and more true” than the one we live in now. By showing the impact of simple, loving moments, nonprofits will create genuine, engaged communities that are eager to make the story their own.

Pinterest Connects “DIY” People to Your Cause Grist used Pinterest to inspire people to take eco-friendly actions through recipes and projects.

The State of Storytelling in Philanthropy Five tips to help build your organization’s storytelling efforts.

How to Incorporate Multimedia into Your Storytelling What is multimedia storytelling and why should you incorporate it into your content plan?

How To Win Your Year-end Appeal: A Storytelling Checklist Ensure your year-end appeal meets its goals through effective storytelling.